This article by literary historian Kim Roberts, who documents the oftentimes obscured and vanishing places where writers lived in DC, reminded me of my own search for a now-forgotten writer in one of DC’s most famous neighborhoods.  It’s not often that I get to do a bit of literary sleuthing, but searching for what’s left of E.D.E.N. Southworth in Georgetown feels that way, because her presence has been so neatly eviscerated. Southworth (that’s Emma Dorothy Eliza Nevitte, for those not in the know) was one of the most popular authors of romance in the nineteenth century. She wrote more than 60 novels with some pretty phenomenal names that would not at all sound out of place as Lifetime movies (Cruel as the Grave; Tried for her Life; Retribution). The plots of these novels are equally fantastic: characters cross dress and rise from the grave; they encounter Confederate pirates off the coast of Africa; they start their lives as penniless orphans and inevitably become adopted by fabulously wealthy men. In the second half of the nineteenth century, Southworth was a literary star, so much so that her home in the Georgetown neighborhood of Washington, D.C., became a tourist site. 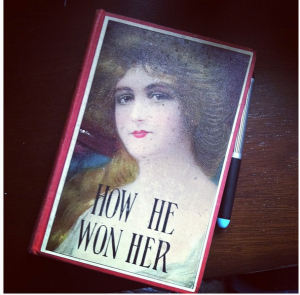 A copy of Southworth’s novel How He Won Her. Image: Jill Caddell

Southworth died in 1899, just on the cusp of the twentieth century, and with that new century Southworth’s literary legacy was steadily forgotten. Her Georgetown home, a quaint cottage with gingerbread house-like gabling, was torn down. Like Richards, I often walk or drive past the site where the home stood (on the bluffs near Georgetown University overlooking what’s now Key Bridge and the Potomac—basically at the top of the infamous Exorcist Stairs) and think about Southworth. What remarkable knowledge she would have had of the river, of the bridge (it was the Aqueduct Bridge then), of all the goings on of her neighborhood.

One day a few years ago I decided to track down the little bit of Southworth that’s left in Georgetown: her gravesite. When Southworth died in 1899 she was buried in Oak Hill Cemetery, a lovely spot on the edge of Georgetown leading down into Rock Creek Park. Several famous people are buried there, including Abraham Lincoln’s Secretary of War Edwin Stanton, Washington Post editor Katherine Graham, and several miscellaneous Civil War generals. Also buried there, for a few years, was Lincoln’s son Willie, who died in February 1862. (Lincoln often visited the quiet spot where Willie was buried, on a hill at the edge of the cemetery overlooking Rock Creek, and even though Willie was exhumed in 1865 to travel back to Illinois with his father, visitors still leave pennies on the site of his first burial.)

Southworth’s grave is marked on a map of the cemetery, so I figured she’d be fairly easy to track down, but the size of the cemetery and the fact that the section she’s buried in is overgrown made it quite difficult. Eventually I found a gravestone in about the right spot, but couldn’t make out the words on it; using my finger, I traced the letters engraved on it: E.D.E.N. This was it.

A few months later, I took my friends Jon and Brigitte to see Southworth’s grave (and thank God for grad school friends who are also obsessive over nineteenth-century minutiae). Jon thinks and writes about paper and printing, which came in handy as we again tried to make out the letters on Southworth’s grave. We didn’t bring rubbing papers, but Jon rubbed some dirt into the stone which instantly made the sunken letters appear.

Southworth’s novels are brilliant, swashbuckling, fun reads, and they’re also incredibly subversive of nineteenth-century gender roles. Thankfully, literary critics have finally begun to acknowledge Southworth’s influence, and her work has gained new attention in scholarly circles. I often stumble upon copies of her novels in antique malls, languishing unread among the other forgotten books of long ago. Southworth may be difficult to find in Georgetown, her beloved home, but her words remain—if you know where to look.

I’ve been following the developments around PBS’s new dramatic miniseries Mercy Street since the project was announced, for two reasons: (1) I study and write about the Civil War. (2) I live in the town where the series is set, Alexandria, Virginia. I’d like the series to succeed, to be good, or perhaps just to be entertaining like the series whose viewers it’s meant to appeal to: Downton Abbey. There’s certainly plenty of dramatic fodder in Civil War-era Alexandria: a Southern port city occupied by Northern forces for the entirety of the war, Alexandria was close enough to both DC and the front lines of the war’s fighting to see its share of death and injury and ruin. Moreover, as Mercy Street‘s co-creator states in this Washington Post interview, the city became a haven for runaway slaves–“contraband of war”–who sought refuge behind Union lines, only to find the government largely unwilling to care for them.

To my mind, it’s the confluence of these factors of geography and influence and power and need that make Alexandria such a fascinating, hopeful, terrible place during the Civil War. Nowhere else was quite like it. In the WaPo interview, Lisa Wolfinger seems to have a pretty good grasp of Alexandria’s unique position during the war, but the accompanying preview runs through a series of what amount to hospital drama cliches viewed through a sepia-tinted Civil War filter: the inexperienced female nurse, the headstrong surgeon, the guy with More Medical Knowledge Than He Lets On, the total jerk surgeon. (Paging E.R.’s Dr. Romano! And watch out for that helicopter!)

Plenty of other places near the front lines of battle (and there were battles LOTS OF PLACES) had hospitals, and if it’s just trying to be E.R. with Hoop Skirts, Mercy Street could take place in any of them. What I’m hoping is that the writers and producers do justice to the reality of Alexandria during the war, which means doing justice to the African American experience of Alexandria during the war. There’s only one African American actor (McKinley Belcher III) who describes his role in the preview video–that of a laborer from Philadelphia who grew up in the house of a physician and therefore has medical knowledge that it seems will be gradually revealed to the doctors and nurses. Ok, cool. The official press release on the series mentions one other black character by name, “Aurelia Johnson, a beautiful, stoical ‘contraband’ working as a laundress at the hospital, and trying to bury her past.” It will be really interesting to see, once the series airs, if these characters can surmount these cliched descriptions. (Does every African American character really need to have a Deep Dark Secret?) The simple fact is that most of the contraband people in Alexandria weren’t beautiful and stoical: they were forced to live in overcrowded camps in appalling conditions, face the constant threats of disease and starvation, and deal with systemic racism, all while living in an active war zone.

I very much hope Mercy Street does justice to that reality, so that its setting in Alexandria isn’t just so much pretty scene dressing. (I’m encouraged that one of their consultants was Audrey Davis, director of the Alexandria Black History Museum.) I hope that the series confront Alexandria’s African American history, that it represents the remarkable aid work of women like Harriet Jacobs and Julia Wilbur, and the creation of the Toussaint L’Ouverture Hospital, built specifically for the treatment of injured African American troops as well as contraband civilians. I hope in particular that the series deals with the petition signed by patients at L’Ouverture Hospital to insist that black troops who had given their lives to the Union cause should be buried alongside white troops in Alexandria’s National Cemetery. (I intend to write more about this petition in another blog entry, because it’s a vital and all-but-forgotten moment in the history of black protest.) I hope it’s not just trading in tired cliches, but actually digging into the complicated, thorny, painful reality of Alexandria’s past. Come January 2016, we’ll see.

Further Reading: For first-hand accounts of Alexandria and its contraband population during the Civil War, read Harriet Jacobs’s reporting in The Freedmen’s Journal  or her friend Julia Wilbur’s astonishingly detailed diary (a PDF of the whole thing can be found here). For more on the L’Ouverture Hospital petition, check out the Friends of the Freedmen’s Cemetery site. A new memorial was dedicated at Alexandria’s Freedmen’s Cemetery just last year; read about the historical work that identified the site of the cemetery here.